But, as for the harvest. It was fairly meager pickings this week. I actually harvested more than I care to admit because a rather large amount got eaten in the garden. I pulled the pea vines and well, any peas got eaten while I was there. We had a few cool days so there were more than I care to admit. But the vines were well and truly shot and our hot weather is upon us and not relenting so I knew the vines had no hope. I also ate about a half pound of blueberries. I now have 5 pounds in the freezer, so a decent amount for the year. Not enough for our large family, but a good start!

As for what I can actually attest to? 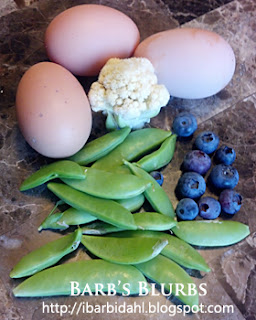 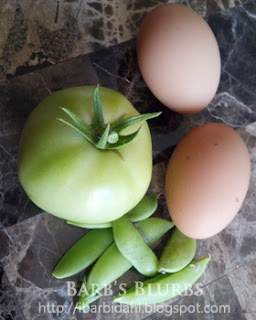 Zucchini made a major come back this week. This one in the picture is only one of 10 that we ate. I grilled a few, but this wasn't out favorite this week. Our favorite is oven roasted with grape seed oil, mozzarella  garlic, spices and tomato..oh - YUM. Even picky teenager eats it like it's going out of style.  We try to take major advantage of it this time of year because it doesn't last long. I have two very strong plants right now but the bugs have come out this week and that means the plants (not just the zucchini) are going to be suffering soon.
I knocked the tomato off the vine but it is nearly ripe now. I also took one that was starting to blush and ripened it with a banana. That was the one we used for the zucchini oven roast. The snap peas are still giving and looking O.K. The vines are hanging tough for now. Not producing well, but still just enough to save their booties.
The blueberries are just giving  the bare minimum they can now. The mocking birds found the fruit this week and I got dive bombed by 3 of the suckers Saturday. I may have to invest in a pellet gun. Wonder if Mockingbird stew is any good? Kidding...sort of.
I'll be back to give details of my weekend later. For now- I'd better get back to work.
See you soon!
Barbie~


I will be saving many more seeds this year so check back!

Constants in my garden: